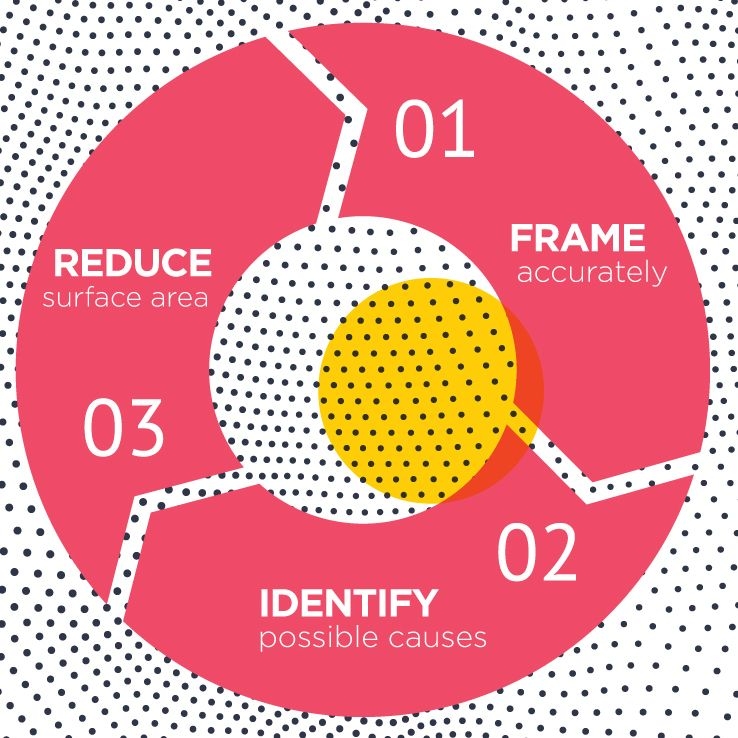 Over the past week I’ve been in two situations which have encouraged me to think about the way I ‘debug’ or problem solve.

After reflection, I thought I’d share an unconscious framework I seem to follow, whether it be for solving problems in life or in code. Having a simple pattern to follow may empower you to solve problems in a more timely manner with less anxiety.

Hold onto the following two scenarios as we explore further:

We’ll explore the the following pattern which is iterative, so we’ll repeat over and over until we get to the root cause and then solution:

Before you go any further, it’s really helpful to frame the issue accurately. For example:

Why frame the problem like this? Framing the overall problem avoids assumptions. Notice in the bass guitar example, that the friend immediately assumed that the amp was the problem and therefore was fixated on ‘fixing the amp’ (ignore all other possibilities)?

In most cases, there could be a number of things causing the problem, or even a specific combination of one or more things. It’s helpful to identify each of these broader pieces. For example:

Bass Guitar example?—?the relevant parts that could cause the issue may be:

Notice that for now, we’ve identified the broader pieces like ‘Bass Guitar’. Right now, it’s not yet helpful to further break the bass guitar into small pieces (eg. strings, pick ups, knobs, wiring etc). Remember, this process is cyclical, so in the next loop, we may need to identify the pieces of the bass (if we find that the bass guitar is relevant to the issue).

Now that we’ve identified each of the pieces, we need to focus on testing and eliminating each piece one-by-one until we find the piece that’s broken. We can be tempted to lazily “scatter-shoot” our attention across all pieces at once; however we must procedurally isolate and test one piece at a time to prove that it is or isn’t a suspect in this problem.

Isolating might mean swapping out whole parts or disabling whole features to determine if that piece has an effect on the issue.

Let’s go back to our examples:

Great so the problem was the first lead (not the amp)!

If we’re interested in digging further into why the first lead doesn’t work, we could repeat the process with the smaller problem?—?Frame the problem as ‘the lead isn’t transmitting a signal’, identify the pieces as 2 plugs and wires and reduce the pieces one-by-one.

We may then find that it’s some CSS, and therefore need to repeat the process within the CSS. As they say, rinse and repeat.